How would you react if a beggar offered you money on the street? Would you accept his generosity, kindly reject it and offer more back — or lose your temper and throw the cash back into his face?

That’s what California entertainer Yousef Saleh Erakat sought to find out when he pretended to be homeless. He lay down on a Los Angeles sidewalk and was filmed dishing out dollars to unsuspecting passersby.

It’s a bizarre combination of heartwarming, indifferent, eye-opening and infuriating — perhaps much like the human race itself. Erakat opens the clip by holding out a $10 bill for a smartly dressed man who walked by in a suit and with his cell phone pressed to his ear.

The offer didn’t go down well.

A second man walks by, typing on his phone. On seeing Erakat, he promptly says: “I don’t have any money man.”

Erakat responds by saying he’s actually trying to give him money.

“Does it look like I need your money? F***k out of here,” the walker angrily replies before walking away.

A third man, who appears to have an British accent, tells Erakat to “p*** off, mate.”

And when he offers up cash to a woman, she furiously responds by saying: “Are you trying to be funny? Are you kidding me?”

Another man stops to give Erakat his water bottle. But when he’s offered money back, he takes the cash but gets angry and walks away.

The most extreme encounter comes when Erakat offers to pay for a man’s parking meter. He immediately starts loudly boasting about the cost of his $50,000 Mercedes Benz.

Only two people come out well in the 5-minute clip.

One man hands back the $10 bill, along with some cash of his own. “It’s a good message, so positive,” Erakat is told.

And a woman also hands back the money, with some additional bills, so he can go and buy breakfast.

Erakat said point of his stunt wasn’t to see if he’d be offered cash.

Instead, he wanted to find out “how people feel about themselves when someone who is classified as “lesser” than them on society’s class ladder offers them money”.

The results, he revealed, were “not expected and not wanted.”

“At the end of the day, even the most poor man can be the most rich depending on how much love he has in his heart,” he added.

Wife Kept Her Secret Hidden In The Walls, 50 Years After Her Passing He …

Nurse sharks might look a little intimidating, but they are actually friendly and curious. …
Savage Video
Enjoyed this video? 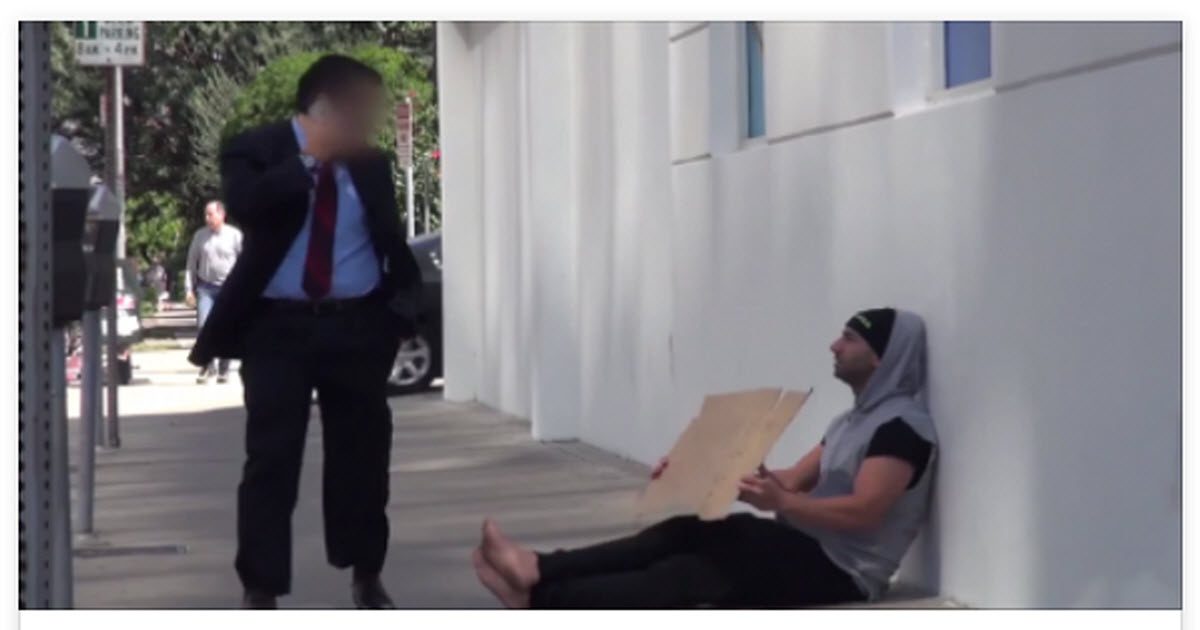